FIND A PRODUCT BY 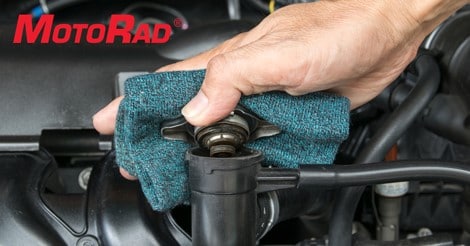 Think about it; caps on containers are there to keep liquids in, not let them out; but that’s exactly what radiator pressure caps do. As the temperature of a liquid increases, eventually it will boil and ultimately turn into vapor. If you look at water; its boiling point is 212 degrees F, when it is under pressure the boiling point raises. Take a simple example, a pressure cooker you have in your kitchen will cook food faster because the water in the device is hotter.

The Function of Radiator Pressure Caps:

Most radiator pressure caps keep the system pressure at 16 PSI so the engine coolant can get considerably hotter without the fear that it will boil off. If there is no pressure in the cooling system, the coolant will boil off. On the other hand, if the pressure was allowed to increase above 16 PSI the cooling system, including the hoses and even the radiator, could simply burst or even explode if the conditions were right.

Never lose sight of the fact that a liquid expands as it gets hotter. As engine temperature increases, the coolant temperature increases as well, if the temperature exceeds the norm. The design of a typical radiator cap is such that liquid is allowed to escape; it does so by moving from the radiator to a reservoir.
When the car engine is shut down, it begins to cool the coolant contracts. If there were not a radiator pressure cap installed, the system would draw in air. Air causes poor engine cooling and is the main cause of cooling system component corrosion.

As the vacuum continues to build up, the two-way check valve, which is exactly what a radiator pressure cap is, goes to work. The cap allows the liquid that was transferred from the radiator to the external reservoir to be pulled back. As long as there is enough coolant, there is no room for air.

As a responsible car owner, you should be keeping your eyes on such things as oil level, transmission fluid level, windshield washer fluid level, and the level of the coolant in the reservoir. Most of these canisters are made from clear plastic making it simple to see the level. If the level gets down to about 50 percent full, top it up with a fifty-fifty mix of anti-freeze and water.

Radiator pressure caps are an important component to the proper operation of your car; have the cap inspected periodically, if it has failed get it replaced immediately.

STAY UP TO DATE WITH ALL THINGS MOTORAD

Leave your details and be the first to receive our latest news and updates.

More From Our Blog